Trump Tower (C) Megastyle 2018
"Trump Tower 4k" was a game made for the "Craptastic" 4k game coding competition arranged by Reset Magazine in 2018. Of 24 great contributions, this game ended up as number 8 in the competition. A brushed up version with credits was later created and made available on the b-side of the limited physical version of "Tombstones"

After winning the election, the biggest and best party ever was arranged in "Trump Tower". Our hero, Donnie, wakes up the day after with no recollection of what happened during the party. When he looks around, he discovers that all his money is gone, together with his underpants.

Your mission is to help Donnie around all the floors in Trump Tower, and pick up money, his underwear and whenever you get the chance: Grab that pussy!!

Control Donnie with joystick in port 2. This is a one button game, so the only way to control him is by using the firebutton to jump. Avoid spikes from the floor and the roof by jumping over and inbetween them, Donnie will run faster and faster after each completed floor. Gain extra points for picking up cats, coins and female underpants.

Developed by Megastyle
Published by Reset Magazine and Megastyle

Programming by: Docster
Animations by: Rotteroy
Charset by: FX
Music by: DMX

Thanks to Sparkler, Scroll, Rage and Microbit for helpful suggestions and testing the game.

To play the game, download the zipped Trump Tower archive. It contains a D64 and a TAP file.

The TAP file is a digital version of the Trump Tower plus version (Released on the B-side of  the physical C64 game "Tombstones") with loading music and loading picture.

The D64 contains the 4k competition version, the digital doc file and the plus version of Trump Tower (Without loading picture/music)

If you want to play it on your PC/Mac you can use an emulator like VICE. You can download VICE from http://vice-emu.sourceforge.net/ 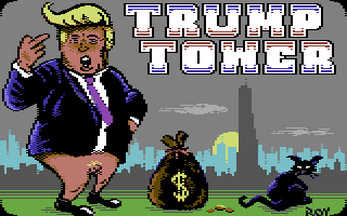 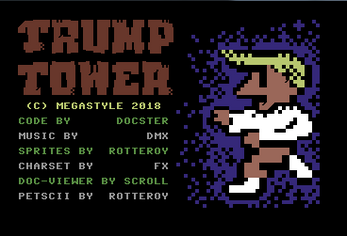 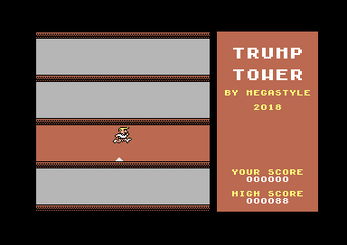